This week I, along with my colleagues Jonathan Waller, Teresa Tocewicz and Adam Hiles delivered a workshop on Business Intelligence in Higher Education. We offered to write up the findings for delegates and this is it….

Background
Thirty Five delegates from institutions and agencies associated with further and higher education were asked to consider three questions and to write responses (as many as they wish) from their individual perspectives on ‘Post-It Notes’. These Notes were then stuck to the relevant section of the large piece of flipchart paper provided to each table and on which they had previously been asked to draw a giant ‘H’. 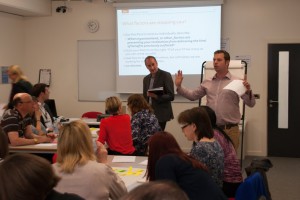 Delegates were asked to consider each of these questions in the order shown below and were given 10 minutes for each one:

How effective BI currently helps you in your role, or How you believe it could and should? (“the desired state”)
What organisational, or other, factors are preventing your institutions from delivering the kind of benefits previously surfaced? (“the barriers”)
What needs to happen within your institution to overcome the issues that are holding you back and preventing you from achieving the successful vision of BI you have articulated? (“ideas generation”)

Following completion of the 3rd ‘ideas generation’ exercise. Each delegate was given three ‘sticky dots’ and given five minutes to read all the ideas that had been suggested by other members of their group and to ‘vote’ for the one, or ones, which they felt had the most merit. All three votes/dots could be allocated to one idea, or spread around multiple ideas, based on their own strength of feeling for a particular idea(s). 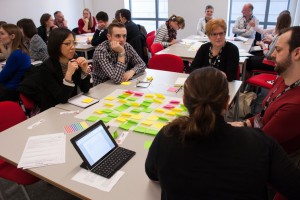 Resources from Jisc to help with BI when back in the office
http://bit.ly/aua-2014-bi

Slides from the Session
http://bit.ly/biataua2014

The rest of this document is a transcription of each table’s Post it Notes and votes. As promised, this is now available to those who took part and other interested parties as a record of the discussions and views of those present and will also be considered by Jisc and HESA as part of the preparations for the new BI National Shared Service that is currently being planned. 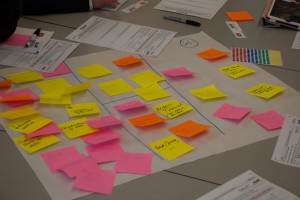